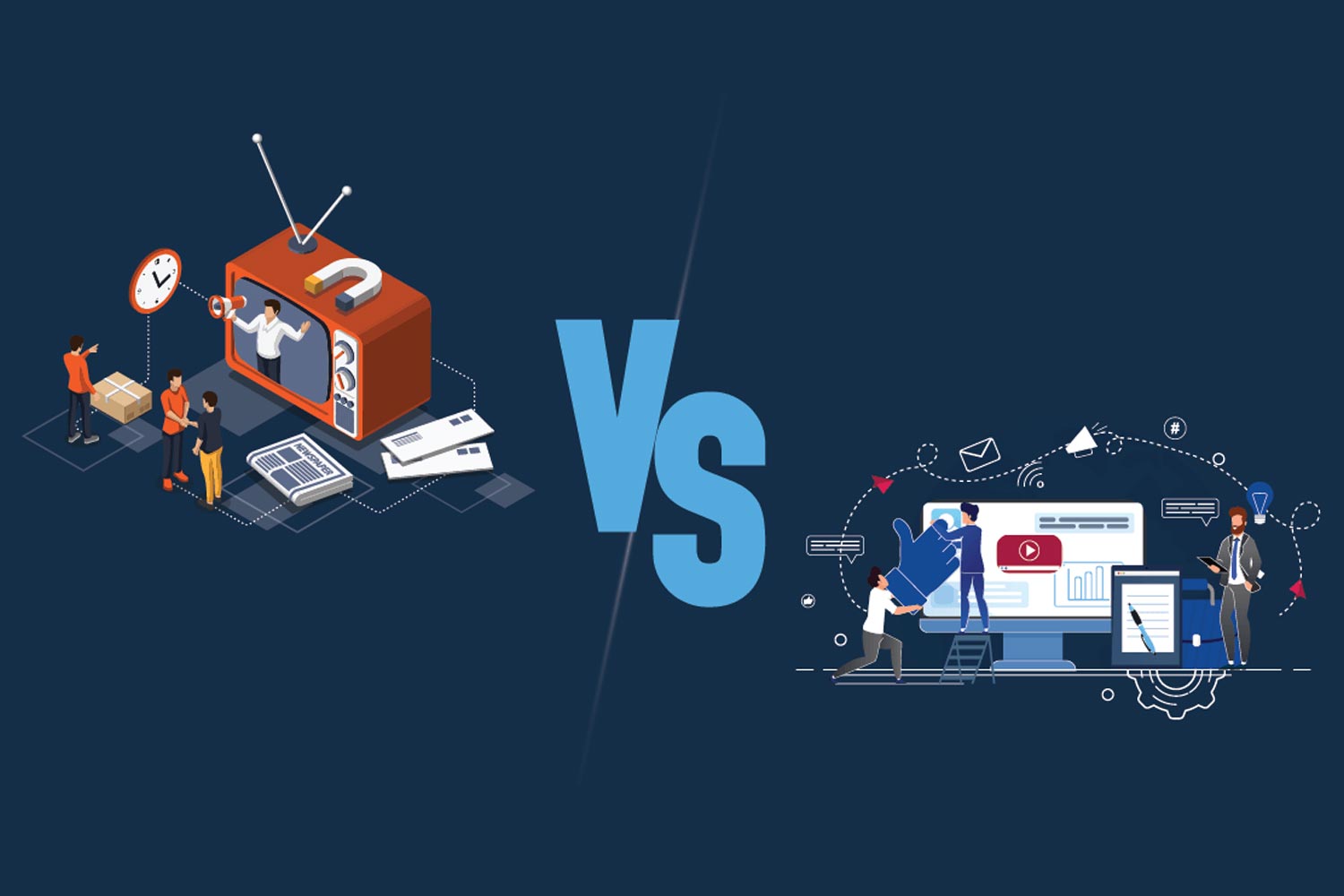 Posted at 06:23h in Blog by Puneet Bhatia 0 Comments
0 Likes

“The activity, set of institutions, and processes for creating, communicating, delivering, and exchanging offerings that have value for customers, clients, partners, and society at large”.

If we elaborate this definition to compare and contrast how marketing activities were carried out traditionally to how they are being managed in the digital sense, we would see technology playing a big part in this transition.

Factors impacting the shift from Traditional to Digital- Traditional marketing techniques (which were more prevalent pre-1990s after which interactive technology started making its impact) focused on elements which in the present age have undergone significant shifts. The key reasons for that include-

Albeit, traditional marketing methods have their own importance while targeting niche customers and high-end groups who are more used to personalized and value –added targeting

Role of the Internet- The DotCom Era

The transition from traditional to digital marketing has occurred over a period of time and on the basis of strong fundamental changes in which technology impacted marketing. The most of them undoubtedly has been the invention of the internet and its wide application to business marketing. The concept of Internet which began with the development of electronic computers in the 1950s in the United States, impacted the basic manner in which information would be stored and distributed globally through the concepts of communication protocols and internetworking (wherein multiple separate networks could be joined to a network of networks).

More important were the advancements which led to the creation of E-mail and WWW (world wide web) which brought the power and influence of the internet to related it to common man’s needs for communication and information. E-mail started in 1965 as a way for multiple users of a time-sharing mainframe computer to communicate with each other. In 1989 a scientist at CERN, Tim Berners-Lee with his invention of the World Wide Web, ensured that practical application of this technology would be made available to all. This, followed by the inventions of web browsers like Mosaic and Netscape, made sure that anyone who was sitting in any corner of the world would be able to access data and receive information from any other part of the world. This liberated the way information would be shared and marketing would be promoted in the coming years.

World Wide Web leading to an explosion of information share- The invention of internet led to a large-scale economic boom never ever witnessed before. The evolution of WWW brought with it development of HTTP (Hyper Text Transfer Protocol) which is the foundation of data communication for the World Wide Web. HTTP functions as a request- response protocol in the client-server computing model. To understand it a bit further, typically for any particular data to appear on any web-page, a request is placed by the client to the server using an HTTP protocol. For Example, A Web browser like a Netscape could be the client and a music player running on a computer hosting a website maybe the server.

Emergence of Websites and the concept of URL – World Wide Web, started facilitating this display of text and images through websites which were a set of static web pages containing information useful to their target audience. A website is typically hosted on at least one web server and accessible through an internet address known as the Uniform Resource Locator or the URL. All the websites together constitute what we call as the World Wide Web. Websites contain web pages which are typically documents in plain text with specified formatting instructions of Hypertext Markup Language (HTML).

Dot-Com Era & the phenomenon of Digital Marketing: Digital marketing began to create and use web-pages to build virtual information centers for their products and brands primarily for information dissemination and also to be the first movers to adapt technology as a part of their marketing activities. In that period the entire scale of activities and reach of internet for marketing was still not well established and it should be said, even difficult to envision. A unique phenomenon that occurred with the rise of WWW related to what we call as the Dot-Com Era or more popularly referred to as the Dot-Com Bubble.

With websites started to be created on a rapid scale, each individual/firm had to create a unique name or URL which would become the address for their venture online. Dotcom is referred to as the last part of the URL wherein .com is a short form for commerce, which stood for companies whose main business, was identified to be internet commerce. As it became clearer to companies, investors and speculators that internet is going be to be next biggest medium for selling and marketing, a large number of these companies started setting up virtual shops in the hope in the expectation that a large part of their business would start happening online through these websites.

This led to multiple IPOs in succession wherein businesses were throwing huge sums of money on a relatively new medium for which they had little knowledge and no experience. Mostly the valuations of these companies were based on nothing more than just business ideas scribbled on a piece of paper. The basic principle was that investors did not want to lose out on a chance to be a part of the gold rush, even when they had no understanding of how or by when these investments turn into a profit.

On March 11, 2000 Nasdaq, the key Stock Index for Wall Street witnessed a tumble of technology shares valuation, following which the valuation of a large of number of these dot-com companies started to fall rapidly. Nasdaq experienced big falls as the business community realized that most of these technology companies were merely bubbles waiting to be burst and blow away billions of dollars with them. This led to the era which we commonly know now as the Dot-Com bust, post which a lot of companies actually understood that digital for the time-being was to play a supportive role in marketing and sales would primarily be still driven by physical models, a thought which would change in the coming decade.

Through-out this mayhem, the biggest positive takeaway was that digital marketing as it is known to be today got defined and established. Many interesting business ideas came forth, which a decade later, would flourish to actually become internet behemoths.

As discussed in the last section, even while the Dot-com bubble was taking technology stocks down, a lot of positives were also being registered on the internet timeline. In 1995, Amazon.com bookstore had appeared, Netscape IPO was launched and Sergey Brin and Larry Page were planning the future Google. 1996 saw the appearance of Microsoft Internet Explorer and Hotmail came up as the first web e-mail site which was the first instance where internet started to impact the daily lives of its consumers in an impactful manner which would lay the foundation of B2C business to consumer as a prominent online business model.

By 1997, people in the United States were looking at more than one million sites on their screens and blogging as an activity was starting to take prominence. The next year saw Mozilla coming up with an Open-source browser and Google answering more than 10,000 search queries a day. All of these were positive and stable milestones which saw internet takes its baby steps in an environment of huge frenzy and over-hyped expectations.

The emergence of Microsoft as the most dominant browser along-with AOL buy of Netscape were activities at the peak of the dot-com bubble which would have significant impact post 2000 in terms of Microsoft and Google dominating the technology landscape. The biggest impact at this point in time was the emergence of search as a broad area of research where rapid strides led to the expansion of web as a critical marketing platform and Google as its most dominating player.

Growth and impact of Search Technologies- The biggest impact which the internet had on marketing can be clearly attributed to the rise of Search Technologies. The main aim of a search engine is to organize the internet and provide an inherent structure for easily accessing information on specific keywords. Research on Search computing had begun as early as 1990 with the first full-text web search engine WebCrawler’s launch in 1994. Before WebCrawler only web-pages were searched and this was the first search engine which was “all-text” crawler based and allowed users to search for any word on any web-page. Also in 1994, Lycos was launched and it became the first major commercial endeavor of its kind.

The following years saw a lot of competing search engines including Excite, Infoseek, Inktomi, Altavista, Yahoo, the last two of those becoming respective industry leaders in Web Directories and Web Search engines before Google came into prominence. Around 2001, Google with its proprietary “Relevancy Ranking” approach was close to disrupting the Search Engine business and in the process create a commercial engine which would make it the center of internet activity. Google’s PageRank patent was not only a technological revolution but also a business one which changed the way marketing could be approached and profitable business models be developed on the internet.

Apart from Search there have been multiple other technological advances post 2000 which have impacted how business started to be run on the internet. Key ones of those include impact of File-sharing Technology, integration of communication services, growth of design- User Interface (UI) technologies, emergence of social collaboration tools among others. We would touch upon a few of these in detail wherever appropriate in the book to understand their right impact in the growth of digital marketing.

From Web 1.0 to Web 2.0- The Changing nature of Web- With the emergence of multiple technology streams beyond the Dot-com era, it is important to trace how the nature of web itself has transformed over the years and how it impacted internet commerce and marketing.

The term Web 2.0 which was coined by Darcy DiNucci in 1999, was popularized by Tim O’Reilly at the O’Reilly Media Conference in 2004. It came to signify the cumulative changes in how web-pages were made and built from their earlier avatar pre dotcom era.  Web 1.0 came to be known as the era in which vast majority of users simply acted as consumers of content and content creators were very few (according to Cormode, G. and Krishnamurthy, B. – 2008)

The shift from Web1.0 to Web2.0 and now even extending to Version 3.0, has had a major impact on how marketing through the internet has evolved and continues to do so, thus opening newer avenues to reach out to and meet the ever-changing demands of the consumer.